The Jungle Games slot game was launched by NetEnt in the summer of 2010, so it's getting on a bit nowadays so could probably be considered a bit of a classic. Featuring a standard 5-reel layout and 20 pay-lines, this low variance casino game offers players a pretty decent RTP of 96.6%.

Jungle-themed slots are popular in the casino land with titles such as Amazon Queen, Gonzo’s Quest and uh, Mad-Mad Monkey roaming about. Netent recently forayed into the dense undergrowth again with Jungle Spirit: Call of the Wild. However, unlike its successor which takes itself rather seriously, Jungle Games is a tad more frolicsome with players expected to help the local wildlife in a kind of savannah-based Olympics.

As is usually the case with slots developed by Netent, Jungle Games is beautifully designed. A variety of well-drawn cartoon characters decorate the reels including a table-tennis playing rhinoceros, a lion in boxing gloves and a non-binary hippopotamus with towel and swimming-goggles. The transparent reels are set against an African landscape that’s decorated with acacia trees and what appears to be a running track. The full range of game symbols in Jungle Games are included below with details of their reel values:

The wild, which is signified by a trophy, substitutes for all symbols apart from the scatter. Any wins arising from the scatter (a medal) amount to the total stake times the multiplier, with any pay-outs independent of bet lines selected. A minimum of three scatters activate the Pick Win feature which allows players to choose either the multiplier or Bonus Win in coins. If Jungle Games free spins are chosen, these are played at the same stake level as the round which activated them. Additional spins may also be won and are automatically added on. 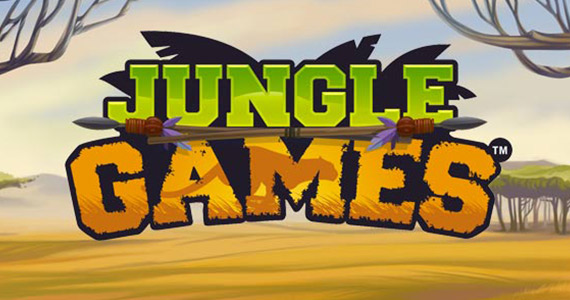 Given the title and theme, we happily assumed that Jungle Games would include an elaborate bonus round where players had to help bestial competitors around a track or some such activity, by spinning reels. How foolish we were. Free Jungle Games slots are provided by a sizeable number of respected online casinos. Often accessible without the need for registrations, these demos function in exactly the same way as the real play versions. So game-play as well as the frequency and size of the pay-outs are identical as per most regulators. The chance to practice on Jungle Games no deposit demos offers an excellent opportunity to practice before parting with any cash.

Despite its polished appearance, Jungle Games is a rather primitive casino slot by today’s standards. There’s no bonus game, with the only distraction to the base game being the Pick Win function. And the low variance means that players can expect regular, albeit small pay-outs – fine for casual gamers, not so good for jackpot nuts. In conclusion then, Jungle Games offers a basic gaming experience that probably won’t appeal that much to slot sophisticates. However, penny-pinchers should be entertained…for a short time.